Kamikaze. The name says it all. With 500mg of caffeine per full scoop, coupled with the most powerful stimulants and nootropics available, this is one pre-workout that will have you powering through any training session and putting your gym bros to shame. And now it’s got the added benefit of the incredible PUMP that comes with Glyco-Surge!

Kamikaze is taken 30 minutes pre-workout (.5 scoop). Always start with with 1/2 scoop or less!

Huperzine A – an alkaloid extracted from a club moss called Huperzia serrata. Huperzine A has neuroprotective and nootropic properties and gives a mental boost that lasts.

Dendrobium – used to promote the health of the stomach, kidneys, and lungs in Traditional Chinese Medicine (TCM).  It is also used as a strengthening tonic because it contains powerful alkaloids that can stimulate physical strength, energy and mental focus!

Synephrine – chemically similar to ephedrine and pseudoephedrine, but does not elevate blood pressure. Synephrine increases ATP (an anaerobic energy source) and stimulates AMPK, and enzyme that burns fat.

Glyco-Surge (65% glycerol) – Glycerol has been well established as a “hyperhydrating agent” because of its unique ability to affect blood plasma levels. Glyco-Surge helps increase visible vascularity by increasing blood flow to muscles.

When do I take Kamikaze™?
For maximum results, on training days we suggest 1/2 scoop (or less!) 30 minutes before training.

Can I stack Kamikaze?
You can combine Kamikaze with GP3 EVO and Battle Juice for maximum effectiveness.

Do I have to take Kamikaze on non-workout days?
No, but it’s amazing in times of need (gaming, studying, etc.).

Do I need to cycle Kamikaze?
It’s always a good idea to cycle stimulants or take a short break of 3-7 days.

Is there anything illegal in Kamikaze?
It may feel as though it’s gotta be illegal, but Kamikaze has been granted an NPN (natural product number) from Health Canada. Always check with your federation’s list of banned substances if you compete in tested events.

What makes Kamikaze so powerful?
Kamikaze is stimulant focused.  It combines powerful nootropics with the highest amount of stimulants in any pre-workout…ever. 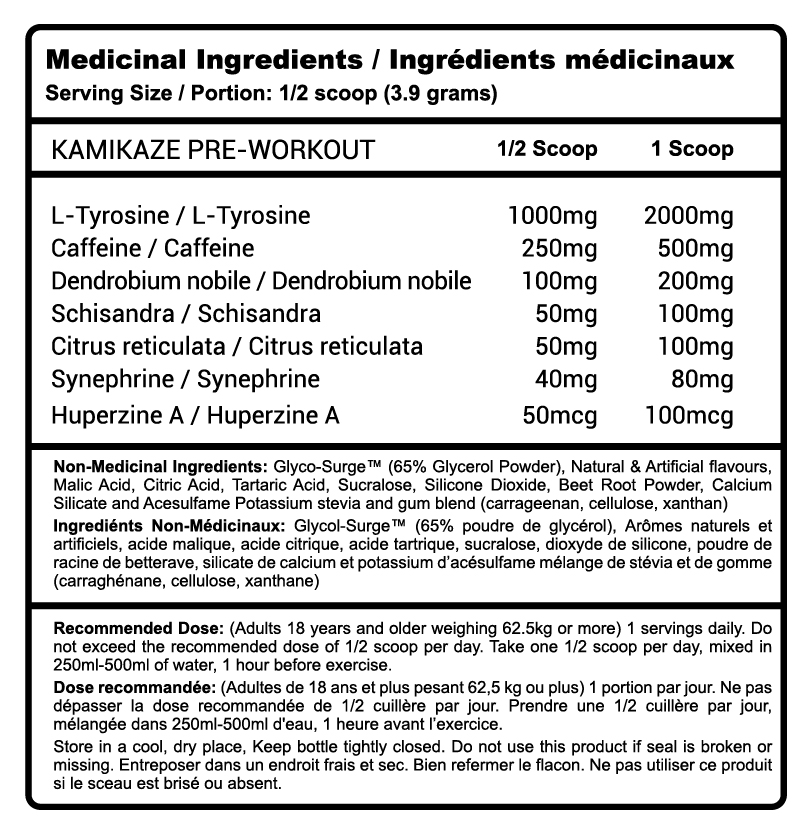 Order in a stack and save!

4 Approaches to Ensuring Your Success

Critical Considerations for Bulking Up

4 Key Tips for Improving Back Development

5 Forgotten Benefits of Being a Bodybuilder

FREE shipping on orders over $59! Dismiss

Manage Cookie Consent
To provide the best experiences, we use technologies like cookies to store and/or access device information. Consenting to these technologies will allow us to process data such as browsing behavior or unique IDs on this site. Not consenting or withdrawing consent, may adversely affect certain features and functions.
Manage options Manage services Manage vendors Read more about these purposes
View preferences
{title} {title} {title}