CLEARANCE The most convenient and powerful pre-workout capsule ever! (Expires 04/23)

CLEARANCE The most convenient and powerful pre-workout capsule ever! (Expires 04/23)

Get insane pumps and focused energy! Never has there been a pre-workout capsule like Flash Bang™. Flash Bang is so cutting-edge that it truly earns the reputation of being “military grade”. Wage War!

Agmatine – also known as (4-aminobutyl)guanidine is an aminoguanidine that was discovered in 1910 by the Nobel laureate Albrecht Kossel. It is a common natural compound synthesized by decarboxylation of the amino acid arginine, hence also known as decarboxylated arginine. Agmatine has been shown to exert modulatory action at multiple molecular targets, notably: neurotransmitter systems and nitric oxide (NO) synthesis.

Niacin – (or nicotinic acid) was the third B vitamin to be discovered (hence the name B3). Niacin causes the blood vessels to dilate or open up near the skin, which results in a hot, tingling sensation accompanied by a red flushing of the skin. It has been shown to have an antioxidant effect, control blood sugar, decrease of cholesterol levels, detoxify, produce adrenal hormones, produce hydrochloric acid in the stomach, and aid in the production of sex hormones.

Vitamin C – when vitamin C is taken with arginine, significantly more NO is produced. The antioxidant effects of vitamin C protect NO by preventing free radicals from degrading NO.

Vinpocetine – increases blood flow to the brain. Vinpocetine helps to “clear” the mind for enhanced focus. It is used for enhancing memory and preventing Alzheimer’s disease and other conditions that harm learning, memory, and information processing skills.

What can I expect from my first dose of Flash Bang?
Within 20-30 minutes you will notice an enhanced clarity and focus as well as an increase in energy.  As you train you will notice increased blood flow to the muscles and enhanced vascularity and pumps.

Should I take Flash Bang with food?
We recommend taking Flash Bang on an empty stomach (an hour after eating) or immediatley before eating, never directly after eating.

Do I take Flash Bang on off days?
In addition to workouts, Flash Bang is perfect any time energy or focus is needed. Such as studying, gaming, work, house/yard work, etc. 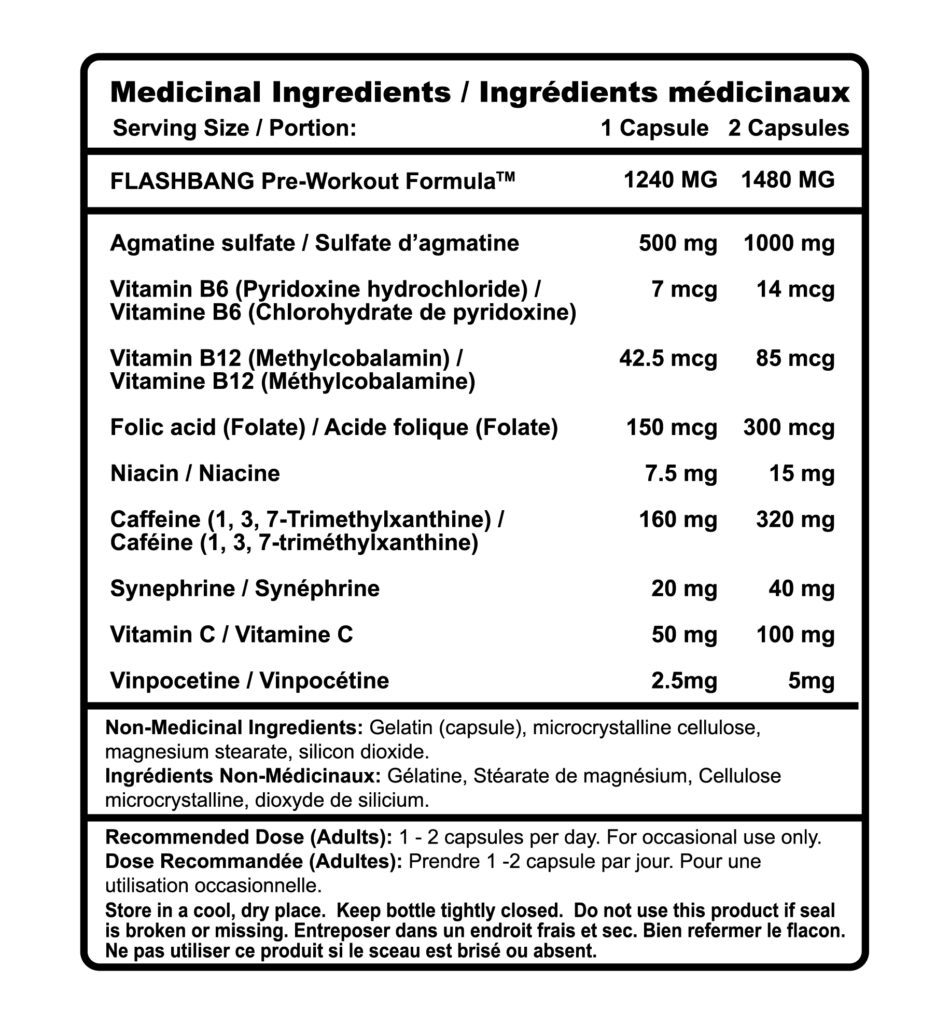 5 Forgotten Benefits of Being a Bodybuilder

FREE shipping on orders over $49! Dismiss

Manage Cookie Consent
To provide the best experiences, we use technologies like cookies to store and/or access device information. Consenting to these technologies will allow us to process data such as browsing behavior or unique IDs on this site. Not consenting or withdrawing consent, may adversely affect certain features and functions.
Manage options Manage services Manage vendors Read more about these purposes
View preferences
{title} {title} {title}